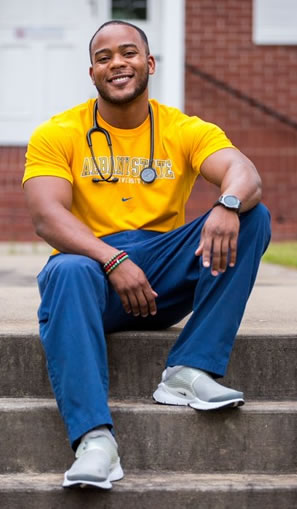 Summer 2014, I made my mind up that I was going to Nursing School. At the time I was an Air Force medic as well as a Manager for Verizon Wireless Incorporated. I had already exhausted my school loan for a degree that I was not working in and began getting increasingly frustrated with myself that I was not working in the field that I loved. Being in the Air Force I believed that they would cover the cost of me going back to school for the nursing degree that I saw myself being able to do more with. I applied and was accepted to a private nursing school. After two months of application processes and financial aid wars I was ready to start. The total cost for the two years that it would take me to get my BSN was about $60,000. I was expected to make $72,000 as a nurse within my first two years, but the debt that it would have brought outweighed the outcome and because I had 4 years of service in the reserves, but less than 6 months active duty time, I was only able to receive up to $4,000 a year from the military, still leaving me with $51,000 in debt on top of the debt I had already acquired for my first degree. With that in mind, I thought It would be in my best interest to wait and apply to a more financial affordable program that would not leave me in such a stifling debt to income ratio. The next year, I had a lot of anxiety and anxiousness built up in me about getting into nursing school. I knew that it was the field I wanted to be in. I love the ongoing learning process of understanding how the body works as well as providing service to the community. This year, I applied to my Alma Mater Albany State University where I already knew what the tuition was and knew that I could repay that easier than I could if I had gone to the private school. The first day of class for me was January 13, 2016. I was exactly where I wanted to be. I wasn’t sure how I was going to completely pay for everything, but that wasn’t my concern. I was in the place I knew I should be, acting on faith that everything would work in my favor somehow. Just before completion of my first semester of Nursing school, while in class, the professor told us about the WIOA program. He told us that if we met qualifications it could cover most or all of our tuition associated with classes and clinical. I applied before ending the spring semester and WIOA began picking up the tuition that following Fall semester. My tuition, new books, uniforms and equipment was all covered. I even received $10 a day for days that I went to class or clinical. WIOA had assigned me to an amazing Career Facilitator who took care of all of my school needs and questions promptly. I put forth little extra effort to get things done and communication was always clear and swift. I did not even know that a program like WIOA even existed until I had already begun my first semester in Nursing school. I was able to place all my efforts in the successful completion of my Bachelor of Science in Nursing. Also, five (5) other students in my class also benefited from the program. With financial stress of school off of us, my classmates and I were also able to capitalize on a study abroad program in India and secure the jobs that we all wanted and worked for. Currently, I am a Trauma Nurse at the Level 1 Trauma Center at Atlanta Medical Center, Downtown Atlanta. After a year under my license, I will return to the Air Force Reserve to continue my career as a Tactical Critical Care Air Transport Nurse to ensure that our men and women down range receive the optimum care so that they too can return home just as every civilian has the opportunity to do when they are done working. This is what fills my cup every day that I clock in and out. I am glad that I have found it and even more excited that I am doing it in a bigger way than I imagined. Thank you to the Middle Georgia Consortium, Inc. and WIOA for helping this reality become mine. Sincerely, a very Grateful Nurse!